The Ingo-bike was invented by two brothers, Phillip and Prescott Huyssen, during the early 1930’s.Its safety and versatility-two could ride as easily as one – made it a healthy source of family fun. The Ingo’s revolutionary driving principle was akin to perpetual motion, and its ride was compared to “the sensation you get standing at a ship’s prow enjoying the lift and lull of the rhythmic swell as the ship rides high on the crest and gently falls into the trough of the wave.” It was touted at the time as the “first great advance in wheels in almost half a century.”Phillip Huyssen got the idea for the Ingo while he was at Prescott were returning home from the Chicago World’s Fair. They were riding in the upper deck of a double-decker bus in order to enjoy the view. While riding south on South Park Avenue, Phil began to watch a group of small boys riding home-made scooters. The scooters were made of 2×4’s and used a roller skate for wheels. one board was used to stand on, one to steer, and a cross-stick was used for handle-bars. One boy was using a 1×6 instead of a 2×4 to stand on, and when he pushed off, the board would hit the sidewalk and act as a brake. As Phil watched the boys, he got an idea, and told Prescott that if the rear wheel hub was off-center, the scooter could be propelled by pulling on the steering bar, and using a little “body English.” The two brothers went home, and began to work on their idea. They built a number of 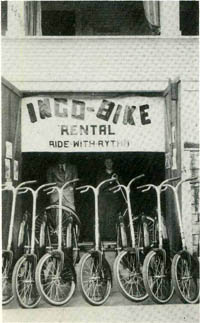 scooters with various size wheels and experimented with putting the eccentric wheel in the front and then in the back. These being depression days, there was no work and the banks were closed, the brothers were short of money and often had to improvise. The first working Ingo had a 12-inch front wheel and a 36-inch 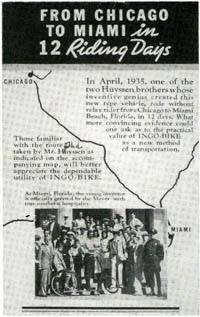 rear wheel. The tried it out on a cold winter night, but avoided riding in their neighborhood at 70th and Calumet in Chicago, as they feared the neighbors would think they were crazy. This first success greatly encouraged the Huyssens, as they had invested hard-to-get money into their invention. They continued their work and made a final prototype with an 18-inch rear wheel made of 3/4-inch plywood wrapped in hard rubber. The bike received U.S. patent no. 1,679,819 with others pending.

The Huyssens took their prototype to Derinforth, Lee, Criten, and Wiles-Patent Attorneys. They demonstrated their invention to their attorney, Horace Dawson, by riding it in the hallways of the office building, and he liked it very much. The brothers borrowed some money and had movies made to show the Ingo in action. They took it to the Toy Fair in New York City where the bike was a hit. The Huyssens received hundreds of tentative orders while they were at the New York’s McCalpine Hotel. On their return from New York, Mr. Dawson recommended 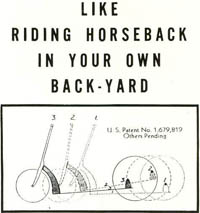 Production of the Ingo was set up in the fall of 1934. Many mistakes were made in the first construction, and a second, improved version was later developed. The second version was quicker and easier to ride, but it still had one drawback, its curved, steel platform supports would crack between the wooden riding platform and the rear wheel when the bike was ridden too hard. Then the rider would have to take the two halves of his broken into to the nearest welding shop. The bike was also very heavy which provided the rider with good exercise or a lot of work, according to his point of view.

Unfortunately, the Ingo was only manufactured for a short time. Production stopped in 1937, when the building the Ingo was made in was converted into an army shell factory. Then World War II broke out, and the Ingo idea was side-tracked.

The Ingo is both a novel and practical invention. It steals the show at any parade, and can be used in eye-catching tricks, such as jumping over low-fences, and pyramid riding in which a group of people form a pyramid while riding on an Ingo. In Hollywood it was pictured in many magazines, ridden in movies and in a Three 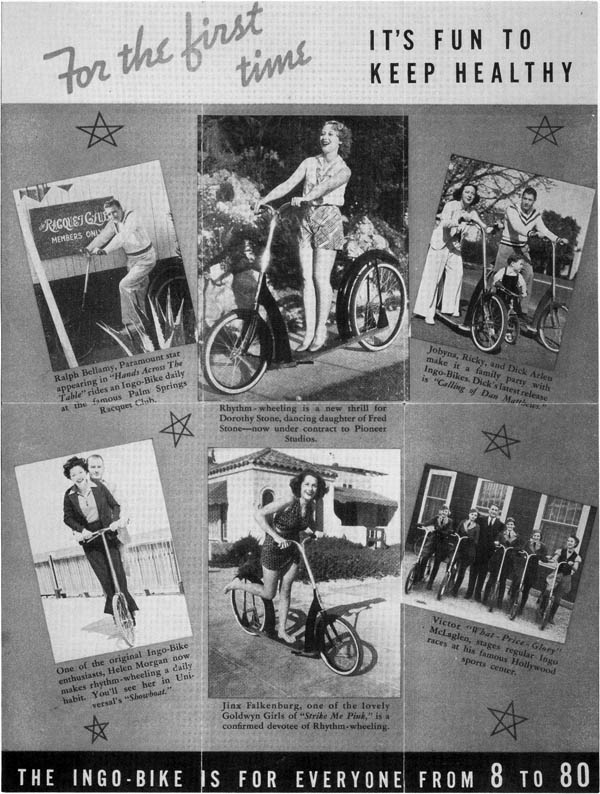 Stooges comedy and it was featured in the Pathe News. In the 1930’s, rental agencies from Hollywood beaches, to New York’s Central Park, did a substantial business renting out Ingos and teaching people how to ride them. They often gave out membership cards, which allowed the carrier to ride for free, after having paid for a certain number of rides. Games such as Ingo-polo became popular. Regular Ingo races were held at Victor McLaglen’s Hollywood Sports Center in the ’30’s, and today, these bikes which can reach speeds of up to 20 miles per hour are raced on the quarter-mile track at Wheelmen meets.

The Ingo is not only fun to ride, it is also one of the safest bikes ever invented. The riding platform is only six inches from the ground, so injuries from falling or being bounced off are unlikely. There are no chains, sprockets, or gears to catch fingers or clothes, and the fenders prevent both flying mud and injuries from the wheels.

When compared to modern-day 10-speeds, the Ingo bike doesn’t seem to be a distance machine, but its inventors proved otherwise. On one of their early rides, Prescott and Phil rode from Chicago to Milwaukee, Wisconsin, in 8-1/2 hours. On another long and widely publicized ride,

Phillip Huyssen rode from Chicago to Miami, Florida, in April, 1935. The trip took him 12 days, and on his arrival he was officially greeted by the mayor of Miami. Six Ingos were shipped to Florida for publicity on his arrival, and many people learned to ride there. This ride also led to the Ingo being featured in the Miami Chamber of Commerce promotional magazine. The inventors weren’t the only people who used the Ingo for long-distance travel. A 113-mile long Ingo-bike derby, running from Los Angeles to the Desert Circus Day Celebration in Pal Springs, California, was planned both to prove the practicality of the Ingo for traveling long distances, and to demonstrate the ease which which it could be used for sport and to improve one’s health.

Many people used the Ingo for basic transportation, and office workers bouncing to work down Woodward Avenue were a familiar sight in World War II era Detroit. Others rode the Ingo as a safe, effective way to keep in shape. Ingo riding was promoted as a health-giving sport and was compared to tennis and jogging. It was advertised as a new Hollywood craze, used by the stars to keep their healthy good looks. The exercising theme was carried out in the Ingo’s original name, “Exercycle,” which was used in early news accounts. Its name was later changed to Ingo because R. C. Ingersol made “Ingo-clad” steel. Ingo-riding was touted as a gentle, rhythmic, non-monotonous daily exercise, which was a pleasant way to lose weight and gain perfect posture, poise, and balance. Ingo-riding was said to flex the muscles, rest the nerves, tone the system, and renew vitality. The slogans, “It’s fun to keep healthy,” and “The Ingo is for everyone from 8 to 80,” promoted this idea.

In recent years, the Ingo has not been forgotten. Wheelmen from all over the country collect, restore, and ride them. In various cities, modern bicycles which have been customized with an Ingo-like off-center rear hub, have been ridden in parades and as street bikes. Phil Huyssen has continued working on the Ingo idea. He has made a child’s

scooter patterned after the Ingo and is trying to make connections with a company to develop it. Mr. Huyssen also obtained a patent on an improved, easier-riding Ingo in 1972, which he hopes to get into production. 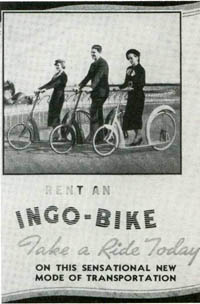 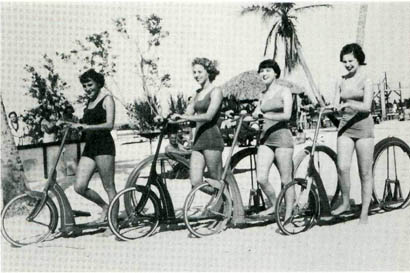