This is my most recent find. I got this in trade today from Tim Brandt a local collector and friend. His story and history on the bike is as follows.

This was one of my first prewar deluxe Schwinns. Before I describe it I will give its history. I was at a local collectors house checking out his bikes. I was interested in buying a middleweight for my girlfriend
to ride. As I was leaving the basement a frame hanging from the ceiling caught my attention. I admired
the condition of the paint. I pulled it from the ceiling and was amazed that the downtube sticker was
partially intact and the badge looked close to NOS. The owner began telling me that it was a complete bike, just in pieces at the moment. He began showing me all the parts which were in exceptional condition. Then he walked me over to another part of the basement and point up in the rafters. “There are the fenders”, he said. I was puzzled, and thought he was mistaken. “Those can’t be original”, I remarked. He insisted they were the fenders that came on the bicycle so I didn’t argue. He also showed me a big funky wing style chain guard that he said came on the bike but was sure it wasn’t original. He had a replacement prewar Schwinn feather guard for it that needed painting. I asked him what the price of the bike was out of curiosity. Apparently the bike was his brothers, who bought it from an old timer at a garage sale. He paid $100 for it at the sale (lucky bastard). He estimated his brother would want around $1000 for the bike and told me he would talk to him.

I was new to the prewar era of collecting and had to make a few phone calls to ask about the fenders. To my surprise a collector told me they were original, very rare fenders. At that point I knew I had to make a move on the bike. We agreed on $1000 and I went and picked it up. As I was walking out the door with the bicycle I asked if I could have the big funky guard and he said sure. He also gave me a pair of red block Wald pedals (Torrington 10 style). I figured I could sell the pedals and the guard to offset my price a little. I put the guard on Ebay and got $16 for it. I shipped it out and forgot about it. Then about two weeks later Bob Usasi called me and asked me to send a picture of the guard. I did and when I got his response my heart dropped. THE GUARD WAS ORIGINAL. He had seen a picture of the same bike in Mark Mattay’s calendar. I just about puked as I was telling him I sold it on
Ebay. I told him the buyers handle and he knew the person (Dan Lepro). He made a phone call to Dan and told him my situation. Apparently Dan bought it for another person and already gave it to them. They put it on a Monark. Dan spoke with the person and he agreed to sell it back. I had to give Dan the red block pedals, which I was happy to do.

After more research the bike was determined to be a 1941 DX. The main feature of the bike, other than its condition, are the gothic aluminum fenders and chain guard. According to literature, these fenders were produced and offered as an upgrade from 1937 to 1939; which is weird because the bike is a 41. The fenders also have flat braces, which were discontinued in early 1937. The guard was added to compliment the fenders. Every bike I have seen with these fenders has this guard. Up to this point I have seen a total of 6 bikes with these fenders. Most are pictured on this site. All Excelsiors, most are girls bikes. I am confident to says this bike is 1 of 2, but could be wrong. The only other
known of is Mark Mattay’s. If you have one of these bikes please come forward.

As for the rest of the bike, it features a locking springer, Goodyear w.w. G-3’s, cross-braced Torringtons, messenger deluxe saddle and EA horn (which still works). Enjoy. 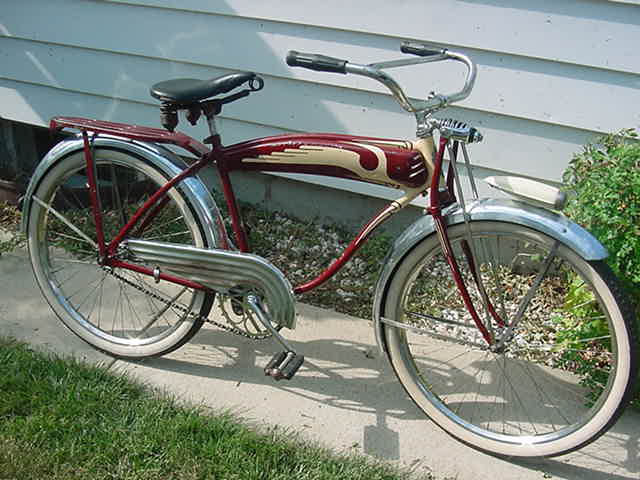 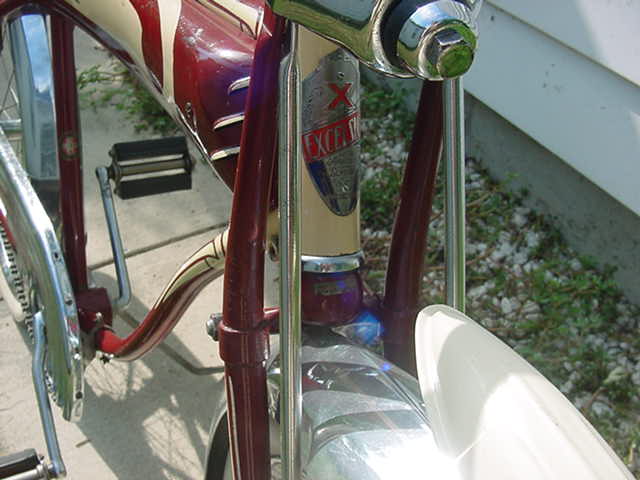 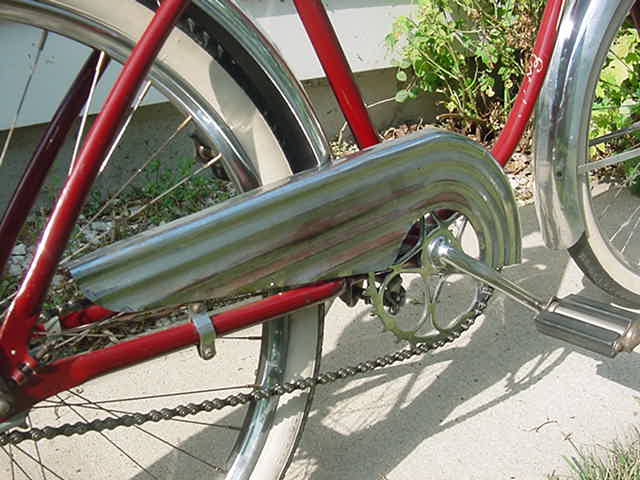 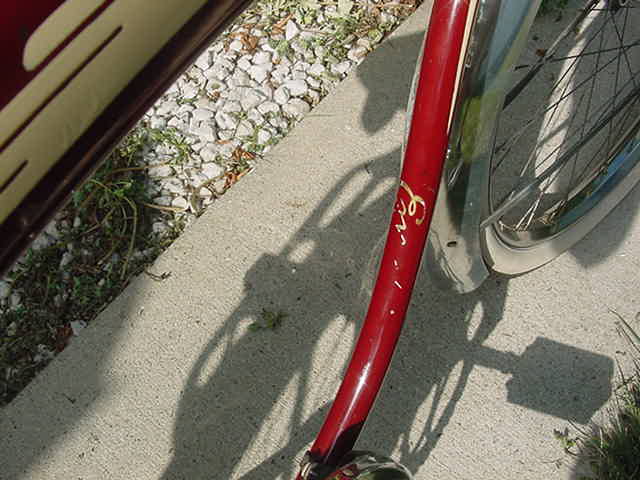